(Almost) All Hands on Deck for Calcineurin

Multiplex flag of countries in the 2018 World Cup (from pixabay.com)

If there was a World Cup soccer championship for cellular proteins, it’s a pretty sure bet that calcineurin wouldn’t make the team. That’s because this protein is one of those players that just can’t help but use their hands! And as pretty much everyone knows, that’s a big no-no for soccer players (except goalies, of course).

Conserved across virtually all eukaryotic organisms — from plants and protozoa to fungi and humans — calcineurin is a very abundant calcium-binding protein. In fact, it’s so abundant that it makes up 1% of the total protein content in a cow’s brain!

But what does this ubiquitous protein do? Well, it’s “merely” responsible for regulating many diverse, fundamental life processes… things such as fertilization, development, behavior, life span, responses to environmental cues, immune responses, cell death, and so on.

For eukaryotes, certain environmental and developmental cues, such as hormones or nutrient availability, can initially signal their presence by causing a change in the cell’s internal calcium levels. Calcineurin helps detect these calcium level changes and then passes the signal on in a chain of events.

Calcineurin is a calcium-regulated protein phosphatase, meaning that when it is activated by calcium level changes, it removes a phosphate group(s) from other proteins, particularly transcription factors. When these transcription factors have their phosphate group(s) chopped off by calcineurin, they travel into the cell’s nucleus and turn on a specific set of genes needed to make the cell respond appropriately to the original environmental or developmental cue.

Calcineurin is actually made up of two different proteins that bind together. One is a catalytic protein subunit (called CNA) and the other is a regulatory subunit (CNB). In our yeast friend Saccharomyces cerevisiae, the regulatory CNB protein subunit of the calcineurin complex is encoded by the CNB1 gene.

Talk to the (EF) hand! …named for Helices E and F (image from Wikimedia Commons)

The Cnb1 protein contains a set of four almost-identical short amino acid domains that are conserved in the CNB proteins of all other organisms. These motifs are called “EF hand” domains because each of them looks like a spread thumb and forefinger of a human hand. And crucially, each “EF hand” can grab and hold onto calcium ions (Ca2+). The four EF hands of the Cnb1 protein are called EF1, EF2, EF3 and EF4, respectively.

But besides holding onto calcium ions, what else do these hands do? Why are there 4 of them? Are each of the hands doing the same thing? Does the right hand know what the left (or the middle, or the other middle) hand is doing?

Well, in the July issue of GENETICS, Connolly and co-workers describe experiments they’ve performed that help figure out some of the answers to these questions for the yeast Cnb1 protein.

The authors made a series of 4 different mutant CNB1 genes, each one having a disabling mutation in one of the 4 EF hands so that the hand can’t grab calcium ions any more. They put these mutant-handed CNB1 genes into yeast cells that had their normal CNB1 gene completely removed. The yeast cell thus ends up depending on a Cnb1 protein with one mutant hand and three functional hands.  In a way, they are making Cnb1p have one of its 4 hands tied behind its back, and then seeing how well it can do its job!

How did they test how well each of the mutant-handed proteins works? Remember that the Cnb1 protein is the regulatory subunit of calcineurin, and calcineurin activates a transcription factor by dephosphorylating it. In yeast, the transcription factor regulated by calcineurin is encoded by the CRZ1 gene. The Crz1 protein recognizes and binds a certain DNA sequence (called CDRE) located just upstream of each one of its target genes and turns these genes on, ultimately changing the yeast cell’s behavior during calcium signaling. The authors put a special reporter gene into their yeast strains; this reporter gene has the special CDRE DNA sequence fused to an often-used bacterial gene called lacZ. The amount of lacZ protein produced by the yeast cells (which positively correlates with calcineurin function) can be sensitively monitored by an easy test tube assay.

Using this test tube assay, Connolly and co-workers tested how well each of the EF hand mutants worked. First they tested how well each could turn on the CRZ1-regulated genes, and also how well the mutant proteins detected calcium. Then they also tested how well each of the mutant-handed Cnb1 proteins worked in high salt environments, during the mating response, under oxidative stress conditions, and even in the presence of immunosuppressive drugs! Why the latter? Calcineurin is a target of immunosuppressive drugs, which are used when people get organ transplants to stop their own bodies from attacking the “foreign” organ. Yeast calcineurin is so similar to human calcineurin that it too is affected by these drugs!

The results were clear (well, actually yellow in the assay)—in all cases, the Cnb1 protein was able to have its EF4 hand disabled and still function perfectly or almost as well as the intact Cnb1 protein! But whenever one of the other EF hands was disabled, the function of calcineurin suffered, and this was true for each of the many ways it was tested, from salt to mating to immunosuppressive drugs.

It appears that when any of the useful hands (EF1, 2 or 3) were mutated, it causes Cnb1p to improperly change its shape in response to calcium, and this misshapen protein can’t do its job of activating Crz1p and ultimately getting the cell to respond to calcium-mediated signals properly.

And (#APOYG alert!) these yeast genetic results for the 4 EF hands match very closely to what’s been seen for mammalian calcineurin EF hand mutants in test tube (“in vitro“) experiments, giving an even stronger confirmation to these mammalian results. Maybe yeast will help develop new strategies for calcineurin-related diseases! 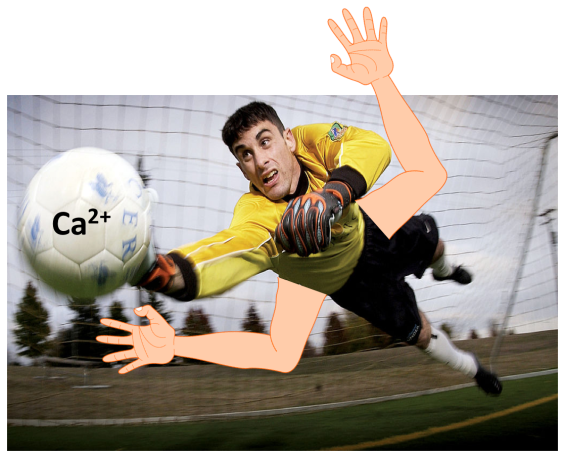 You’ve gotta “hand” it to calcineurin! (from Wikimedia Commons and Pixabay)

So now back to soccer… As we’ve found out, calcineurin HAS to use its hands, so it’s not a good pick for a regular soccer position player. But maybe it could be a super-awesome goalie since it has 4 hands! It even seems that you can tie its EF4 hand behind its back and Cnb1p can still guard the goal just fine with its remaining 3 hands – the EF4 hand seems to be a totally useless appendage! But if you disable any of the other hands, then it causes the Cnb1 protein to bend awkwardly and not do its job anymore.

Thanks to the efforts of Connolly and coworkers, we now know that it’s not quite “all hands on deck” for Cnb1p, but rather “EF 1, 2, and 3 hands on deck” in order to carry out its “goal” of regulating cellular responses to calcium!