This Research Spotlight also comes as a video animation. Be sure to check it out!

In the Star Wars movie Attack of the Clones, Padme and Anakin end up fighting Genosians on an automated assembly line. Padme manages to survive because the assembly line is set up in an ordered and predictable way. She knows when to jump, when to pause and so on to survive. If there was more chaos in the line, she might have been killed and then there’d be no Luke or Leia!

If the Genosian assembly line weren’t predictable, Padme might’ve ended up a pancake.

The same kind of thing can happen when cells read genes. An enzyme called RNA Polymerase II (Pol II) slides along the gene, spewing out a long string of messenger RNA behind it.

Just like the assembly line on Genosis, the gene is set up in an ordered and predictable way. Nucleosomes (barrel-shaped clusters of proteins) are spaced along the gene’s DNA to help keep it from getting tangled up. But when Pol II comes hustling along, the nucleosomes need to be carefully removed in front and then replaced after it passes.

Similar to the plight of poor Padme getting hurt if the assembly line were not predictable, genes can likewise get damaged if the nucleosome removal/replacement process goes haywire. In Star Wars, the result of a defective assembly line is damaged droids and TIE fighters. In cells, the result is a changed assembly line—the gene can end up longer! This change can be harmful for both the gene and the cell.

In a new study in GENETICS, Koch and coworkers use our favorite beast, the yeast Saccharomyces cerevisiae, to show that the ISW1 gene is a key player in making sure that the nucleosomes get back on DNA after being taken off. When yeast lack the ISW1 gene, nucleosomes don’t always return after being removed to make way for Pol II. And for some genes, this spells even more trouble. 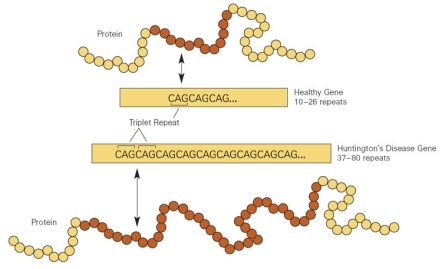 “CAG” starts to spell “trouble” if genes get too many of them. from Wikimedia Commons.

The genes that have the most problems are those that have something called triplet repeats. Basically, this means the same 3 bases (e.g. CAG) are repeated many times in a row in the gene.

Using PCR, Koch and coworkers showed that a gene with triplet repeats ended up with more of them if the ISW1 protein (Isw1p) wasn’t there to shepherd the nucleosomes properly. And too many repeats in a gene can be harmful–not just to the yeast, but to us as well.

In fact, Triplet Repeat Expansion Disorders happen when the number of repeats increases from one generation to the next.  These diseases are some of the most devastating ones around. 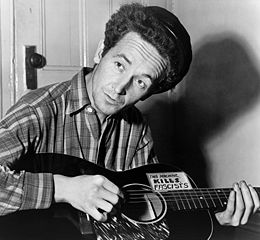 They mostly cause slow but steady degeneration of nerve and brain cells, and the cruel symptoms (loss of body movement control, dementia) often only show up in mid-life. The most well-known is probably Huntington’s disease, which killed folk-singer Woody Guthrie.

So understanding how Isw1p helps keep the Pol II assembly line running smoothly in yeast might help us understand how triplet repeat expansion happens in humans, and may eventually give us ideas how to keep it from happening in the first place. This is especially likely because humans have proteins that are similar to Isw1p and probably do something similar.

To determine how Isw1p regulates nucleosome reassembly, Koch and coworkers used Southern blots to show that yeast that lacked Isw1p couldn’t replace their nucleosomes after Pol II had passed as efficiently as yeast that had the protein. This means that when cells are missing the ISW1 gene, a long stretch of the DNA is left bare after Pol II has passed by.

This stretch of nucleosome-free DNA can end up forming new structures called hairpins that can cause cells to send in DNA repair machinery to deal with it. Unfortunately this machinery isn’t always that great at fixing the DNA. Like the Three Stooges adding more pipe to try to fix a leak, the cell can end up adding more DNA to deal with the hairpin.

Like adding extra DNA, throwing extra pipes at a plumbing leak is a great way to make a bad problem worse.

But for the cell, the results are not as hilarious as they were for Moe, Larry, and Curly. That extra DNA can lead to deadly genetic diseases.

A yeast cell needs Isw1p to keep the cell from bringing in the Three Stooges to mess up its DNA and potentially cause devastating genetic diseases. If it turns out the same is true in people, then once again yeast will have shown us how human genetic diseases might happen. And perhaps provide a target for us to go after to prevent these diseases from happening. #APOYG!

Breaking Up is Hard to Do

When a cell goes cancerous, its chromosomes get seriously messed up. Pieces get deleted, duplicated, mixed and matched. One of the worst things that can happen, in terms of a cell keeping its chromosomes together, is that a chromosome ends up with two centromeres.

When a chromosome gets pulled in two directions, it tears. No one wins that tug-of-war.

This isn’t as simple as the rope breaking during a tug-of-war, though. A chromosome can withstand around 480 piconewtons of force before breaking, but the force exerted by the spindle that breaks the chromosome between the centromeres is just one piconewton or less. Clearly something else is going on to create those breaks!

In a new study out in GENETICS, Song and coworkers looked more closely at what happens when a dicentric chromosome breaks. They used a diploid strain of S. cerevisiae to show that where the DNA breaks is not random. In their experiments, the break tended to happen within 10 kilobases (kb) of the “foreign” centromere.

Song and coworkers streaked diploids from isolated colonies to a plate lacking galactose and then investigated how the yeast managed to resolve its double centromere issue. Two key ways that the yeast could eliminate the additional centromere involve crossing over between sister chromatids or break-induced repair. They focused on these as it is relatively easy to identify the DNA breakpoint. Because the two chromosomes in each pair are so different, they just needed to look for a loss of heterozygosity. In other words, where did the chromosomes become the same?

When they looked through 27 colonies, they found that the breaks weren’t randomly spread between the centromeres. Surprisingly, about half of them happened very near the conditional centromere. To make sure that there wasn’t something special about these sequences, they looked at two different strains with the conditional centromere located in different places on chromosome V instead of III. They obtained similar results.

Since the force exerted by the spindle isn’t enough to break the chromosome, there must be enzymes involved in creating the DNA breaks. But why do they prefer the region near the conditional centromere? One possibility is that the DNA there is stretched and is more open to enzymes. As the chromosome is being pulled apart, an enzyme gets into this region and manages to cut the DNA.

Although we don’t have time to go into it here, the paper also has a lot to say about the variety of ways that a diploid cell resolves its extra centromere in a way that allows it to survive. And that will inform the study of chromosome dynamics in all kinds of cells.