Yeast Show No Fear of Commitment

Meiosis in budding yeast is typically induced by starvation, with a signal roughly translated as “make spores quick because things are terrible right now.” When the outside food supply dries up, meiosis gets initiated in the nucleus of the yeast cell. If food is resupplied early enough, meiosis can pause and mitosis—a normal cell division—can be undergone instead, a process called “return to growth” (RTG). There’s a sharp point-of-no-return in mid-prometaphase, though, after which no amount of food will make cells go back to mitosis—they’ve committed to meiosis.

The components involved in this commitment to meiosis have been poorly understood. It was shown by several studies that the transcription factor Ndt80p is required at high levels to establish meiotic commitment by inducing middle meiosis genes. When levels of Ndt80p are low, in contrast, cells show a commitment defect in which they go back to mitosis even after initiating meiosis, leading to defective polyploid germ cells with multiple nuclei.

Gavade et al., in a study that just came out in Current Biology, discover six novel regulators of meiotic commitment. The authors first identified proteins whose overexpression reversed the commitment defects of a low-Ndt80 strain. The pool of potential regulators was narrowed by looking at mutants of the genes identified in the overexpression screen to see if decreased levels would cause commitment defects. They found BCY1 (involved in nutrient sensing), IME1 (a meiosis-specific kinase), CDC5 (Polo kinase, with related roles in mitosis), BMH1 and BMH2 (14-3-3- proteins involved in numerous types of signaling), and PES4 (an RNA-binding protein with an uncharacterized role in cell cycle control) to all have roles in meiotic commitment. The authors further showed that Bmh1p and Bmh2p are direct regulators of both Ndt80p and Cdc5p, the former by protein stability and the latter by protein activation.

This intriguing study is an excellent example of how complex processes—such as the effect of food on sexual reproduction—can be teased apart in yeast. A relatively simple screen was able to identify proteins not formerly known to have a role in meiotic commitment, and it will be exciting to see if these proteins have orthologs in mammals that play related roles.

Launching into meiosis too soon is as dangerous (for a cell) as launching a nuclear missile. Luckily both have protocols to make sure each can only happen in the right circumstances. (Hopefully never for the nuclear missile.) Image from Wikimedia Commons.

If the movie WarGames is anything to go on, the US government does not make it easy to launch a nuclear missile. Two soldiers have to do many things simultaneously and in the right order before that missile can take flight.

This makes perfect sense as you do not want to launch a nuclear attack unless you absolutely have to. The continued existence of the human race depends on these fail safes being in place and working. The same goes for a cell that is heading into meiosis.

Meiotic fail safes are in place to ensure the survival of a cell during the dangerous, early part of meiosis, when there are lots of double-strand breaks in the DNA. These all need to be resolved before a cell is allowed to continue through meiosis to create gametes. If the cell moves on while the breaks are still there, gamete production will fail and the cells will die.

While the exact sequence of events needed to launch World War III is known (at least by a few people), the exact details of getting a cell safely through meiosis are a bit murkier. With the help of good old Saccharomyces cerevisiae, we have the broad outlines, but are still investigating the finer points.

A new study by Prugar and coworkers in GENETICS has helped clear up a bit of the murk in yeast. They have uncovered a connection between the meiosis-specific kinase Mek1p and the transcription factor Ndt80p that may explain how a cell “knows” when it is safe enough to emerge from prophase and keep progressing through Meiosis I.

In this study, the authors show that once Mek1p activity falls below a certain level, it can no longer keep tamping down Ndt80p activity. Once unleashed, Ndt80p can go on to activate many genes, including the polo-like kinase CDC5 and the cyclin CLB1. This round of gene activation allows the cell to progress through meiosis.

The key to teasing this out was a set of experiments where Prugar and coworkers were able to control the activities of Mek1p and Ndt80p independent of the cell’s DNA state. It is like circumventing the set of protocols to get those missiles launched.

To independently control Ndt80p activity, they used a form of the protein that requires estradiol to be active. And they controlled the activity of Mek1p by using a mutant, mek1-as, that is sensitive to the purine analogue 1-NA-PP1. In the presence of this inhibitor, Mek1p stops working.

They looked at the targets of these two proteins to infer activity. For example, they determined if Ndt80p was active by looking for the presence of CDC5. And to see if Mek1p was active, they looked for phosphorylated Hed1p. 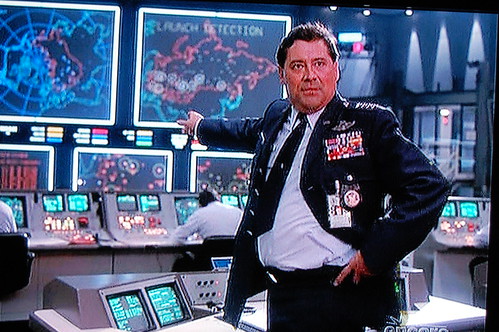 In the end, as yeast relies on MEK1 to prevent a meiotic disaster, humans, not computers, kept the world safe in the movie WarGames. Image from flickr

When Ndt80p was activated through the addition of estradiol, CDC5 was turned on and Hed1p lost its phosphorylation. This loss of Mek1p activity did not happen as quickly as with 1-NA-PP1.

These results suggest a negative interaction between Mek1p and Ndt80p. When Ndt80p is active, Mek1p is not and when Mek1p is active, Ndt80p is not. The resolution of the DNA breaks as indicated by the loss of phosphorylated Hop1p was not sufficient to shut off Mek1p activity. It took the activation of Ndt80p for this to happen.

Well, Ndt80p did not directly cause Mek1p’s inhibition. A second set of experiments suggested that a target of Ndt80p, CDC5, was responsible.

For this they made Cdc5p activity independent of Ndt80p induction by making it dependent on estradiol, similar to what they did with Ndt80p. Using a strain deleted for NDT80, they found that inducing Cdc5p activity was enough to eliminate Mek1p activity.

I don’t have the space to go into the rest of the experiments in this study, but I urge you to read it if you want to learn about more of the details of the cell’s protocol for know when it is OK to progress through meiosis.

With the help of the awesome power of yeast genetics (#APOYG), Prugar and coworkers have added to our knowledge about the safeguards that are in place to keep a cell from launching into meiosis too soon. Turns out they are even more complicated than the ones that prevent accidental thermonuclear war.

Genome organization may protect key genes from the ravages of increased mutation rate during meiosis:

Back in 1985, Coca Cola decided to completely rejigger the flavor of their flagship soft drink, calling it the New Coke. This radical change to the product was a colossal failure. Toying with such an essential part of a key product was simply too risky a move. If only they had learned from our favorite beast, Saccharomyces cerevisiae.

In a new study in PLOS Genetics, Rattray and coworkers show that the mutation rate is higher during meiosis in yeast because of the double-strand breaks associated with recombination. This makes sense, because any new mutations need to be passed on to the next generation for evolution to happen, and germ cells are made by meiosis. But their results also bring up the possibility that key genes might be protected from too many mutations by being in recombination cold spots. Unlike the Coca Cola company, yeast (and everything else) may protect essential genes from radical change.

Previous work in the Strathern lab had suggested that when double strand breaks (DSBs) in the DNA are repaired, one result is an increased mutation rate in the vicinity. The major culprit responsible for the mutations appeared to be DNA polymerase zeta (Rev3p and Rev7p).

This may be more than just an unavoidable side effect of recombination. It could be that yeast and perhaps other beasts end up with their genes arrayed in such a way as to protect important genes by placing them in recombination dead zones.

And perhaps genes where lots of variation is tolerated or even helpful are placed in active recombination areas. In keeping with this, recent studies have shown that essential S. cerevisiae genes tend to be located in recombination cold spots, and that this arrangement is conserved in other yeasts.

It is too early to tell yet how pervasive this sort of gene placement is.  But if this turns out to be a good way to protect essential genes, Coca Cola should definitely have left the Coke formula in a part of its genome with little or no recombination. Mutating that set of instructions was as disastrous as mutating an essential gene!