Strung Out Chromosomes and Coyotes

As Wile E. Coyote knows, when setting a bear trap, you need to make sure the tension is just right. As you can see in this video, if there isn’t enough, then the Road Runner gets away:

And of course, Wile E. ends up getting caught in the trap!

Like our super-genius coyote friend, Saccharomyces cerevisiae cells need to make sure there is the right amount of tension sometimes, too. One of those times, for example, is tension on their chromosomes at the metaphase stage of cell division.

If the chromosomes aren’t attached to the spindle in just the right way, the cell will not let mitosis move from metaphase to anaphase. The cell won’t put down the birdseed until it “knows” the trap is set properly.

While Wile E. Coyote probes the tension by eyeballing it, yeast does it in a much more thorough way. Two key pieces of the sensing machinery in yeast are the tension sensing motif (TSM) from histone H3, 42KPGT, and the Shugoshin 1 protein, Sgo1p.

The current model is that the TSM of histone H3 acts as an anchoring point or a landing pad for Sgo1p, the protein responsible for sensing that there is the right amount of tension between chromosomes and the spindle/kinetochore. When the TSM is mutated with, for example, a G44S allele, the idea is that Sgo1p can no longer bind causing chromosomes to sometimes segregate incorrectly.

Previous work had shown that mutating Gcn5p can partially rescue the effects of the G44S allele. In a new study in GENETICS, Buehl and coworkers provide evidence that the reason it can has to do with the tail of histone H3. Basically, this tail can act as a secondary anchor if the TSM, the first anchor point, is mutated. But the tail can only work if it is not acetylated by Gcn5p.

Bad things can happen when plans go astray for Wile E. Coyote and for chromosome segregation in yeast. (Wikimedia)

It is as if Wile E. Coyote’s bear trap is broken so he has to fashion a new trigger to get it to snap. When the TSM of H3 is gone, yeast can fashion a new sensor by eliminating the acetylation on the tail of the H3 histone.

Buehl and coworkers focused on the tail because it is a known target of Gcn5p acetylation. In particular, there are four lysine residues in the tail—K9, K14, K18, and K23—that are acetylated by Gcn5p to varying degrees. The most acetylated is K14 followed by K23 and K18. K9 is hardly acetylated at all.

When they deleted the histone tail, they found that the effects of the TSM mutation, G44S, were more severe. But when they mutated the four lysines all at once, the effects of G44S weren’t as bad. This is consistent with the unacetylated tail serving as a landing pad for Sgo1p in the absence of the TSM. No tail, no binding, leading to chromosome mis-segregation.

As might be expected if this was linked to Gcn5p, each individual lysine mutant had effects that corresponded to their level of acetylation by Gcn5p. So K14A did the best job of partially rescuing the G44S allele, K18A and K23A did an okay job and K9A had very little effect.

Buehl and coworkers provide three additional sets of experiments to show that G44S causes chromosome mis-segregation and that K14A can partially rescue it. There is only time to discuss one of these, but you can read the paper for the other two.

This strategy uses the idea that diploids cannot mate because of a repression function on each copy of chromosome III (chrIII). If a diploid loses one of its chrIII’s, then it will be able to mate.

As expected, the authors found that both wild type and the K14A mutant had very few diploids that could mate. But it was a different story for the G44S mutant—it had many more diploids able to mate, presumably due to the loss of one chrIII. The double mutant K14A/G44S had more diploids mate than wild type but less that G44S on its own.

This is what we would expect if K14A can only affect tension sensing in a TSM mutant. It would do little on its own but could partially rescue the TSM mutant G44S. 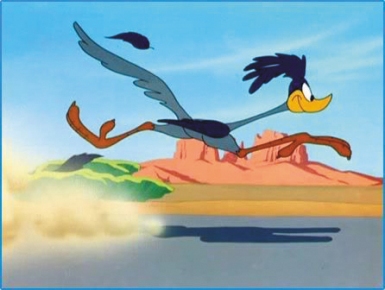 If Wile E. Coyote had a backup plan like yeast does for chromosome segregation, he might get to dine on the Road Runner. (Rosenfeld Media)

The authors next used chromatin immunoprecipitation (ChIP) assays to directly show that the K14A mutation in histone H3 allowed Sgo1p to bind when the TSM was mutated. There was one hitch though—Sgo1p bound most everywhere and not just at the pericentromeres where it usually does.

In a final set of experiments, the authors used GST-pulldowns to show a direct interaction between the H3 tail and Sgo1p. To their surprise, they found that acetylating the tail did not affect Sgo1p binding. They suggest that perhaps the acetylated tail interacts with something that blocks Sgo1p from binding.

Yeast has a backup just in case its main way of sensing tension between the spindle/kinetochore and chromosome, the TSM of histone H3, breaks down. In that case, it can use the tail of histone H3, assuming it is not acetylated.

If only Wile E. Coyote included backups like this in his crazy plans! Then he could finally dine on that tasty Road Runner he is always chasing.