Squeezing Out a Tiny Bubble of DNA

Have you ever tried to walk back to the lab with too many plates between your thumb and middle finger? And had them be so compressed that they shoot out of your hands, spilling all over the floor? Yeah, me too. 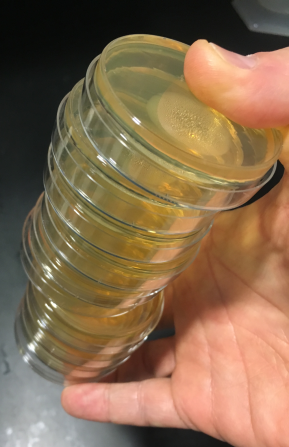 In a process similar to this stack of plates collapsing when compressed, the basal transcription factor TFIIH causes small bubbles of opened DNA by compressing the DNA.

While this situation is bad for researchers, it turns out that the same sort of force may be helpful in cells by forcing the DNA open just a bit to get the ball rolling on transcribing a gene into messenger RNA (mRNA). The DNA is squeezed between two points so that a bubble of DNA pops open, leaving some single stranded DNA for RNA polymerase II (RNAP II) to get a hold of.

In a new study in Nature Structural & Molecular Biology, Tomko and coworkers show that Ssl2p, the double-stranded DNA translocase subunit of the basal transcription factor TFIIH, hydrolyzes dATP or ATP to force open around 5 or 6 base pairs of DNA. Once pried open, this small DNA bubble is expanded to 13 base pairs in the presence of NTP hydrolysis, presumably RNAP II beginning to transcribe the DNA. This stable open complex is now ready for promoter clearance and elongation.

These authors teased apart this mechanism using single-molecule magnetic-tweezers (henceforth referred to as tweezers). The idea is to stretch DNA out between two anchor points, add various components of the RNAP II machinery and various reagents, and to measure the changes in the stretched out DNA. Under the right conditions, these length changes directly reflect DNA unwinding.

Getting a gene read in a eukaryote like Saccharomyces cerevisiae is no easy task. A complicated mass of proteins called the preinitiation complex needs to form on the promoter first.

Tomko and coworkers loaded a subset of this complex, which included the TATA binding protein (TBP), TFIIB, TFIIF, TFIIH, and RNAP II, onto a piece of DNA with a single TATA box-containing followed by a strong initiation site. The authors arranged it so the 2.1 kilobases of DNA they used in their experiments was negatively supercoiled as is found in vivo.

In the first set of experiments, they added NTPs and dATP to their reactions. Most of the DNA did not show any changes as measured by the tweezers, but around 5% did.

There were two distinct populations of DNA in the subset that were active. Around 1/3 of the DNA showed  clear open and closed DNA transitions with the open DNA stretching over about 13 base pairs. The other 2/3 of the DNA showed longer-lived, smaller bubbles of around 5 or 6 base pairs of DNA. The authors interpreted the first as stable open complexes and/or elongation complexes and the second set as bubbles of DNA forced open by the preinitiation complex.

They repeated the experiment in the absence of NTPs and saw only the smaller bits of open DNA. And when they left out both NTPs and dATP, they saw no opened DNA at all.

So the small regions of opened DNA are dependent only on dATP hydrolysis making the Ssl2p subunit of TFIIH, a polypeptide known to hydrolyze dATP, the prime culprit for causing them. Which also makes sense, as Ssl2p is a DNA translocase that has been implicated in previous experiments in forcing the DNA to shorten between the preinitiation complex and downstream DNA. These experiments also showed that NTPs needed to be hydrolyzed to proceed to the next step, a stable open complex.

Just as the bubble-head charm is needed to breathe underwater in the Harry Potter universe, so too are small DNA bubbles needed to get transcription started for RNAP II in ours. (Harry Potter Wiki)

Tomko and coworkers next wanted to determine if these smaller bits of open DNA play a meaningful role in transcription. They tackled this question with a couple of different experiments that both rely on the idea that opening the 5-6 base pairs of DNA is a necessary first step on the way to transcription.

In the first experiment, the authors saw that these smaller regions of open DNA had longer lifetimes at lower NTP concentrations. Remember, NTP hydrolysis is required to proceed to the next step, the 13 bp, more stable open complex. By decreasing the concentration of NTPs, the authors slowed this step down, causing the preceding step of the smaller 5-6 base pairs of opened DNA to hang around longer.

In the next set of experiments, they engineered DNA bubbles into the DNA that varied between 3 and 12 base pairs and tested what size bubble would allow transcription to proceed in the absence of TFIIH, the basal or general transcription factor they implicated in forcing these DNA bubbles open. Previous work had shown that TFIIH is unnecessary if the DNA has a 12 base pair region that is already opened.

Reading a gene is nontrivial in eukaryotes like us, and our friend yeast. The DNA is squeezed by TFIIH within the preinitiation complex to open just enough of the DNA for RNAP II to get a toe hold and get transcription rolling. A much better result than when a similar force gets your stack of plates rolling on the lab floor.

Don Ho probably isn’t singing about tiny, Ssl2p-mediated DNA bubbles but they too are fine.